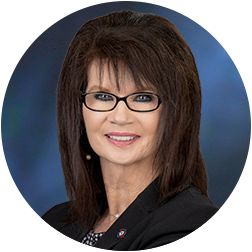 I feel privileged to have the honor of supporting and working alongside an extraordinary team of employees and volunteers at Operation Homefront as together, we reach toward our shared vision of serving America’s military families.

Karen began her career with Operation Homefront in 2008 serving as Director of Operations for Texas. She later moved to the national headquarters in San Antonio leading field office transitions and programs, volunteer management, and staff training which evolved into her current role as Senior Vice President of Human Resources and General Services. Karen has over 30 years in the nonprofit sector with the Girls Scouts, American Red Cross and Operation Homefront. She has experience in human resources, branch operations oversight, fund development, marketing and volunteer management. In her time with the Red Cross, Karen helped create a nationally recognized Youth Volunteer Program and, later, during Hurricanes Katrina and Rita, she expertly stood up a Volunteer Reception and Training Center in San Antonio, responsible for managing and assigning over 12,000 volunteers. These volunteers facilitated the work of five mega-shelters housing over 35,000 evacuees, 24 hours a day. She later developed protocols for “Managing Large Numbers of Spontaneous Volunteers.” Karen‘s family has a rich history of military service. Her late father served in the Army, her late father-in-law served in the Navy, her husband was in the Air Force and her son is a retired Coastie. Karen is a proud wife, mother, grandmother and great grandmother.