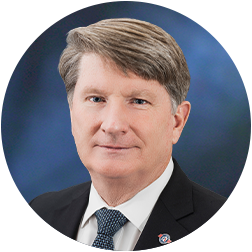 For all those who selflessly serve to defend and protect our way of life, it’s our honor to serve those who make such service possible: the military family.

Bob joined the Operation Homefront executive team in August 2015 following a nearly 31-year career of distinguished service in the Air Force. In his final command assignment, he led the Jeanne M. Holm Center for Office Accessions and Citizen Development, where he was responsible for directing the education and training programs that produce more than 81 percent of the officer cadre of the Air Force. In addition to being an experienced combat pilot, Bob held staff assignments at Headquarters Air Mobility Command, Joint Special Operations Command, the United Nations and the Air Staff. He has flown combat/combat support missions or deployed with joint special operations forces in Panama and Somalia, as well as the Balkans, Operations Desert Storm, Iraqi Freedom and Enduring Freedom. Bob holds a Bachelor’s of Science degree from the U.S. Air Force Academy and Master’s degrees from the University of Southern California and the National Defense University.