The viral military Christmas card. Did you happen to see it floating around internet land the past couple of months? Totally cliché, right? 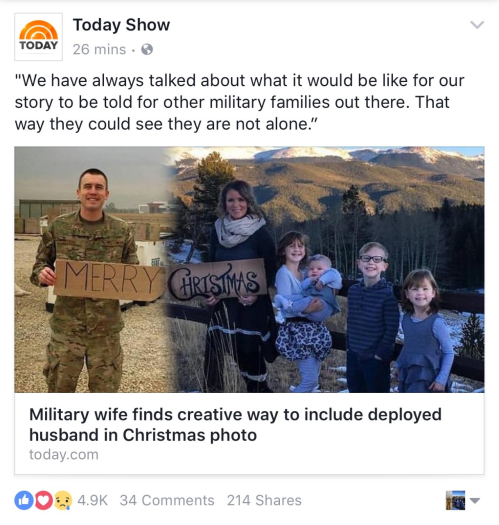 Let me back up and introduce myself. Hey, I’m Ashley! I’m an almost 30 year old (how did THAT happen) wife and mother to four perfectly imperfect children….oh and I’m a military spouse whose husband is only halfway through the journey to retirement.

We’ve had quite an interesting military experience that I’m sure MANY of you can relate to.

When we were 18 & 19, we had this crazy idea to get married and start a family together…but didn’t factor in the expenses. My husband, Brandon, worked at a BBQ restaurant and I worked as a hairstylist in a salon. Not too bad, right? WRONG!

We were married 4 beautiful weeks before we discovered we were expecting our first child! How did we find out? The fumes from the hair salon started to make me sick, so I did what any logical 19 year old would do….I bought 10 pregnancy tests and sure enough, they all read POSITIVE.

We told our families and within that process, realized we wouldn’t be able to afford a child with a BBQ income alone, since I could no longer tolerate the smell from the salon.

So, this started our military journey.

If you’re lucky enough to know my husband, you know he is one of the most giving, kind-hearted people on the planet. He will do anything for anyone, which can be taken advantage of at times. He knew that joining the military would cover the medical expenses of having a child, even if it meant sacrificing his own life at some point. Who does that?! Only 1% of America, apparently.

Off to boot camp he went, while I was left behind, 6 1/2 months pregnant. I would write him letters every single day and would pray to receive one from him. Not a single letter came. When I finally saw him at his graduation, he explained that his unit kept getting in trouble, so their punishment was not being able to write letters. I think in a way, that helped prepare me for the rest of our military journey.

My husband missed the births of 3 out of 4 children. One due to tech school and the others due to deployments. The recruiter must have forgotten to mention the chances of that happening. Either that, or we were just young and naïve and assumed we would have a fairytale life. 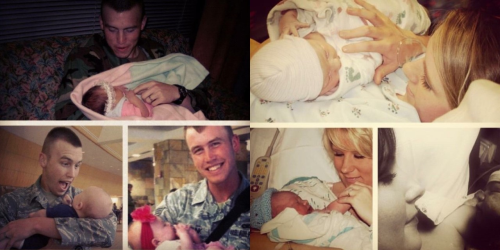 When he left for this past deployment, my children were 9, 7, 5 (she turned 6 while he was gone), and 2 months. “They” say deployments get easier each time. I say “they” must not have children or “they” somehow speed up time during deployments. No one prepared us for the emotional strain that this deployment would bring. The kids were now old enough to be downright MAD for him being gone. Not just mad, but incredibly sad too.

I had to get creative when it came to keeping the kids and myself connected to the person we absolutely ADORE while he was thousands of miles (7,038 miles, to be exact) away, BUT… I’ve never had a creative bone in my 5’1 body.

*All the mommas say AMEN*

Here are some things my family and I did to stay connected through this deployment:

1) Deployment wall: We had a family night a week or so before my husband deployed and we decided to spend that time putting our deployment wall together! *See picture*

We showed them on the map where we were and where daddy would be. We had two different clocks, one that showed our time and one that showed his. We had a picture of him in uniform and a picture of him with the kids (added later). We had a space where they could roll out a sheet of paper and draw him pictures or write him letters, or even just write down how they’re feeling that day. We had little baskets for mail received and mail to send out. I would catch them going to the wall and just staring at his picture. It was beautiful and heartbreaking all at the same time. 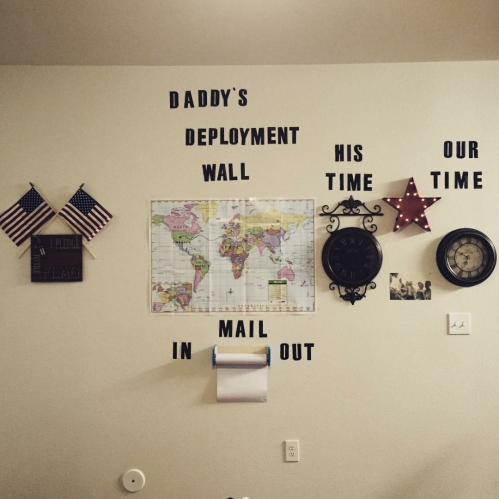 2) Pictures on pillow cases, recording his voice in a stuffed animal, and video recording bedtime stories. If you haven’t visited your Airman & Family Readiness Center, I suggest you do! They have so many different things that can help a deployment along! My husband was able to go and have pictures of him and the kids printed onto pillow cases, have his voice recorded in stuffed animals, AND video record himself reading them each a bedtime story! So they got to see him every night before bed!

3) Care packages: Pinterest has SO many awesome ideas for care packages! The kids loved putting things in the box and decorating it! They would say “Oh! Daddy will LOVE this!” And their little faces would light up! If you’re OCD, this will really test your patience, but it’s so worth it to see them wanting to get involved! 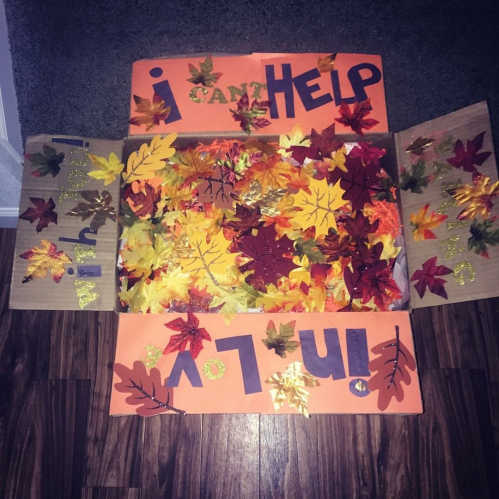 4) Technology: This is huge for military families! We didn’t have Skype or video messenger until my husband’s 2nd or 3rd deployment. Before that, you heard from your spouse whenever they could find an open phone, which was never guaranteed. For this deployment, we were so blessed with technology! The kids were able to talk to their daddy *almost* every morning before school! Of course the connection was sketchy or would fail, but most of the time they could at least say hello!

5) Holidays: Holidays are tough with your loved one halfway across the world. As the parent, you have to put your feelings on the back burner and focus on the physical/emotional needs of your children, ESPECIALLY around the holidays! For holidays, we would remove his picture from the deployment wall and tape it on a chair at the head of the table. This way, the kids could see he’s not been forgotten and that he is still a part of our special day, even though he’s not actually home.

For Christmas, we made our first ever Christmas card! Yes, the viral military Christmas card! Honestly, the card ALMOST didn’t happen. I had my husband take his pictures from his deployment location, but the timing never seemed right for us to take ours. 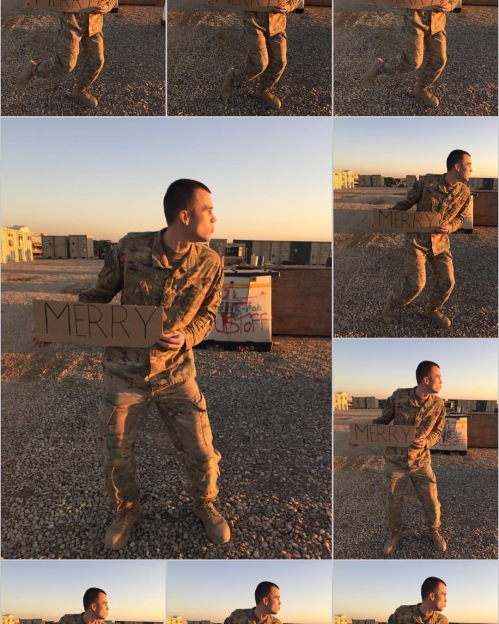 As each day got closer and closer to Christmas, I would see more and more pictures of all the happy families together on their beautifully crafted cards. At first I was sad. So terribly sad. I wanted nothing more than for my husband to be home for Christmas, but I knew that wasn’t an option. So, I decided TODAY IS THE DAY! We went out and got each shot on the first try, thanks momma! 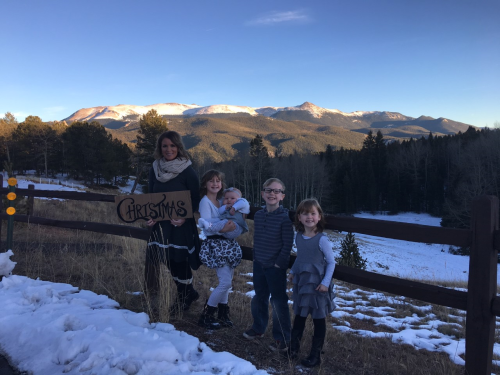 I pieced them together that night and decided to post them on FaceBook. The response was unbelievable! Within a few days, it was EVERYWHERE! So many spouses reached out saying “We’re apart for the holidays too! Thank you for showing us your togetherness through it all!”.

Deployments are hard, especially if you actually love spending time with your spouse and consider him/her your best friend. The days can be so long and it can be so tempting to let that cause division in your marriage or family, but if you can focus on the good, you WILL get through it! Give yourself some grace. You will have days where you just want to bury yourself under the covers and cry and that’s ok! Try not to take that frustration out on the deployed member, but at the same time, be honest with them if they ask what’s troubling you. They will feel helpless at times, but that’s where you have to rise up and show them that you are strong TOGETHER, even if you’re not physically together. Your hearts are bonded, for better and for worse. 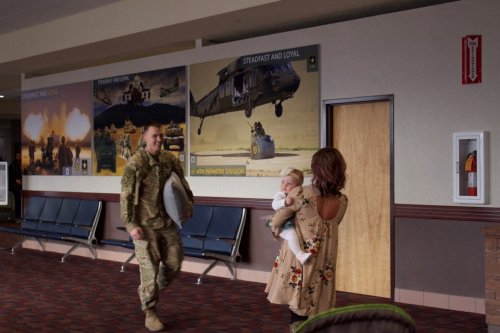