Rebekah Paxton was forced to grow up quickly.

Our 2018 Army Military Child of the Year® Award recipient, Rebekah was confronted first-hand with the wounds of war when her father was injured as a combat medic in the 82nd Airborne Division. He served 19 years and, now medically retired, suffers from PTSD and traumatic brain injury. He is also a cancer survivor.

Coming to her family’s aid as a de facto third parent, Rebekah has spent much of her childhood caring for herself and for her younger brother and sister. She fed them, prepared them for school every morning, and took them to sports practices and games.

Rebekah has used the trial as fuel to motivate her toward a better future. Currently aspiring to become a neurosurgeon, she competed in three subjects for two years with the University Interscholastic League and earned the Medical Science Award of Excellence. “I have grown up at the Brooke Army Medical Hospital in San Antonio and I fell in love with the medical field. After I finish my residency I would like to apply for Doctors Without Borders and take two years helping other people worldwide,” she said.

As she has made college plans, Rebekah has set her sights on someday raising awareness of the plight of wounded veterans and their families. It’s no surprise that giving back is a big part of Rebekah’s past, present and future. Rebekah arrives at a life of helping others naturally. It’s in her DNA. Members of her family have served in the military from the Civil War to present day.

“Personally, I believe there is not enough support for military kids (and) families. I have (had to learn) how to cope with my father’s military-related injuries alone. Not many people outside my family realize what we have gone through in this process and I believe no one really wants to know what goes on. I believe civilians do not understand completely what it is like to have a service member come home from the terrors of war,” said Rebekah. 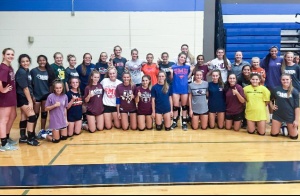 In addition to her passions, Rebecca has a heavy academic load, taking advanced placement courses as well as dual enrollment courses at Missouri Southern State University. Yet she still has time to pursue athletics and serve her community wherever possible. She is a varsity athlete in three sports, and has volunteered hundreds of hours working with children and faith groups. She was editor for the school yearbook and a writer for the school newspaper.

Rebekah certainly has risen to the many challenges her family has faced, and her life is an example of the quote that inspires her:

If all struggles and sufferings were eliminated, the spirit would no more reach maturity than would the child. (Elizabeth Elliott)

“I realize that what I have gone through during these trials have made me better. When I was in my toughest moments I did not believe that I would come out if those times okay. But God has been there the whole time and has given me an opportunity to do amazing things in life,” said Rebekah.

Meet all of our seven Military Child of the Year® recipients and be sure to join us on Facebook on Thursday, April 19 at 7 pm EST for a live feed of the very special awards gala honoring our outstanding Military Child of the Year recipients. Thank you to our presenting sponsor United Technologies for making it possible. We’re also grateful to the following additional sponsors: Booz Allen Hamilton, Procter & Gamble, Microsoft, MidAtlantic Broadband, La Quinta Inn & Suites, Veterans United Home Loans, Under Armour, Tutor.com and Military Times. #MCOY2018